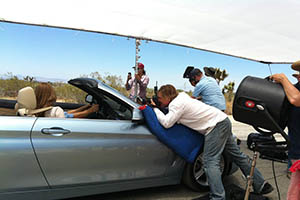 Markus Esser’s art work has been exhibited in Germany, England, Norway, China and New York. He was sponsored by Agfa as a young talented photographer and received an Aaron Siskind Memorial Scholarship. During his artistic studies he was granted with a Fulbright Scholar and went to New York School of Visual Arts.

Before this he also spent an academic year at the University of Plymouth with Jem Southam. He visited China and worked at the Academy of Arts Design, Beijing, and also participated in an exchange with the Oslo National Academy of the Arts. Markus Esser received his diploma in Design at the University of Applied Science in Dortmund from Prof. Arno Fischer and Prof. Hainer Schmitz. In NYC he studied with Charles Traub and Joel Sternfeld.
Markus Esser has directed still productions in various locations including Germany, Spain, England/ London, New York, Rio de Janeiro and Cape Town. The resulting images have been used in campaign ads for Apple Inc., Deutsche Bank, Sony Playstation, Berliner Stadtreinigung, Haspa, T-Mobile amongst others. He redesigned the image pool of Austrian Wienerberger AG. More recently shooting in Germany for Berliner Bank, Janssen&Cilag (Johnson&Johnson) and in the US for Sonic Automotive and France for Renault.
He is owner of his own business in the creative capital of Berlin. The office is located in the exciting and tumultuous neighborhood of Mitte/ Berlin. Please feel free to visit.

Markus Esser is available for creative commission and teaching commission.